The Mobile Studio has travelled to the UK for Manchester City’s in-house TV Broadcast!

Manchester City played against Chelsea in the UEFA Champions League Final on Saturday, May 29, 2021, at the Estádio do Drago stadium in Portugal. The Manchester-based football club’s production crew used the Mobile Studio 02 to live broadcast their matchday show build-up for the event.

Manchester City offered their Etihad Academy Stadium to 4,000 fans as part of their “We’re Not Really Here” (#WNRH) as they live-streamed on the matchday as entertainment, giving them the ideal location to follow the final game on giant screens.

Fans could get involved with the show on Twitter using the hashtag #WNRH, where the guest speakers would react to comments and questions submitted LIVE into the Mobile Studio 02.

Although Chelsea won the champions on the night, the live broadcasting of the event over digital platforms was a huge success, with over 41.2k fans watching the event on Twitter alone.

The Mobile Studios are the ideal remote broadcast solution for any sporting event, allowing you to live stream and film the event. This unit has famously facilitated the live broadcasting of the widely known cycling race, Le Tour de France. 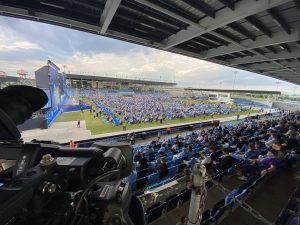 We use cookies on our website to give you the most relevant experience by remembering your preferences and repeat visits for our personalized advertising. By clicking “Accept All”, you consent to the use of ALL the cookies. However, you may visit "Cookie Settings" to provide a controlled consent.
Cookie SettingsAccept All
Manage consent

This website uses cookies to improve your experience while you navigate through the website. Out of these, the cookies that are categorized as necessary are stored on your browser as they are essential for the working of basic functionalities of the website. In addition, we also use third-party cookies that help us analyze and understand how you use this website, as well as personalized advertising. These cookies will be stored in your browser only with your consent. You also have the option to opt out of these cookies. But opting out of some of these cookies may affect your browsing experience.